Hard to imagine that in this country way over 3 MILLION kids are without homes. H-O-M-E-L-E-S-S Kids. I don't get it. Are we willing to discard these kids? Not me. So this blog will relentlessly focus on this issue, hoping to light a spark to fuel a compassion epidemic. Chime in, argue, but do something....

I’m a nomad-by-choice. For the past 10 years, under the banner of HEAR US Inc., my nonprofit organization, I’ve traveled over 200,000 miles of mostly backroads travel chronicling homeless families and youth across the country. I live full-time in a van converted into a motorhome/workspace. I used to run the largest shelter in Illinois outside Chicago. I’ve been working on the issue of homelessness for 3 decades. 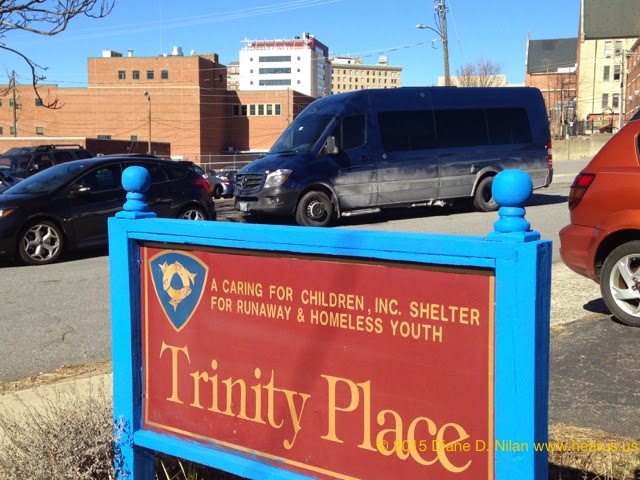 Last night I relented and paid for a campground in Asheville, NC instead of sleeping in my van in the ubiquitous Walmart parking lot because temps were down to 20 and I don’t like to freeze. One of my neighbors, I learned today, was a homeless family staying there because they have nowhere to go. Their school-age children were on the bus and off to school before I stuck my nose outside.

Last night in this funky and wonderful western NC city, motels provided some semblance of shelter for dozens of families who use up their meager earnings to keep a roof over their heads. Others cobbled together a spot on the couch or begged for an empty corner in someone’s basement so they could stay warm and safe.

The meager family shelter options don’t begin to meet the needs of hundreds of families and youth in the county in need of assistance. I learned of one mother, a former school social worker whose loss of housing kicked her and her 8-year-old son to the street. The challenging conditions at the local rescue mission are too stressful for the boy, so he’s staying at a children’s emergency shelter while his mom bunks at the mission.

Family and youth shelter options in Asheville, as with most communities, are horrifically inadequate, forcing homeless families and youth to desperately turn to makeshift options, typically on a night-by-night, or less, basis.  But they’re not “homeless enough” to meet HUD’s standard of homelessness according to Amy Hobson, program coordinator at Trinity Place, a local emergency shelter for kids on their own.

During this, the last week of January, the US Department of Housing and Urban Development, HUD, has mandated that communities across the land send out teams of social workers and volunteers, armed with clipboards, to count homeless persons. The diligent effort of these census-takers does not make up for serious failures on the part of HUD when it comes to addressing homelessness because they don’t count the bulk of their community’s homeless population—the invisible families and youth that desperately need HUD’s housing assistance.

The US Department of Education’s (DOE) 2012-13 report indicates 1,258,182 identified homeless students (not including younger/older siblings or parents), a whopping 85% increase since the 2006-07 school year. Even worse, a recent report, America’s Youngest Outcasts, states that the number of homeless children/youth exceeds 2.5 million (not including parents or single adults). My official HEAR US estimate is 3 million.

HUD maintains their narrow definition of homelessness, the hallmark of their fizzled-out 10 Year Plan To End Homelessness.   The Baltimore Sun editorial opines, “The central principle of the city's 10-year plan to end homelessness was that it would prioritize finding housing first and services second for those living on the streets. Events like today's clean-up are a reminder of just how far we remain from realizing that promise.”

HUD’s “point-in-time” count skips millions of vulnerable children, youth and adults, a potentially deadly omission. “HUD’s policy excludes children and youth who face real harm, including negative emotional, educational, and health outcomes; it also increases their risk of physical and sexual abuse and trafficking,” according to the coalition pushing for the expanded definition of homelessness, Help Homeless Kids Now.

This confused, grossly under-counted data gets presented to Congress, perpetuating the lack adequate funding to address housing needs of millions of people with nowhere to go.

1.     “Homeless” to HUD means staying in a shelter or living on the streets. If you lost housing due to crisis and can’t get into a shelter, and you turn to family, friends, acquaintances or motels, you're not considered homeless no matter how fragile those arrangements are.
2.     HUD demands proof of homelessness (yup, you’ve gotta prove you're deserving of the shelter bed). Such proof might mean an eviction notice, or a letter from a landlord, or your mother-in-law’s note that explains that she kicked you and your kids out. Pity the person who cannot document their situation.
3.     HUD makes it confusing and time consuming for both the shelter provider and the shelter seeker when it comes to proving homelessness (see the chart beginning pg. 3 of this PDF doc). “Arbitrary and unworkably burdensome eligibility rules” now govern our homeless shelter system. It doesn't matter if you’ve got the most desperate family sitting in front of you, HUD’s rules rule.
4.     If you’re a vulnerable (think sex trafficking, sex-for-bed, gang-bait, etc.) homeless youth on your own, but not seen sleeping in an alley, HUD won’t count you. One of the main reasons we have such an abysmal system for serving youth on their own who are homeless is because HUD’s definition of homelessness doesn’t include them, so they’re not counted.
5.     If you’re a family that’s scotch-taped together a flimsy plan to stay with family, friends or acquaintances after you lost housing (doubled up video, Worn Out Welcome Mat), HUD won’t count you. Christine Craft, the Homeless Education Liaison for Buncombe County Schools, told me that 75% of the students she serves don’t fall under the HUD definition, doubling or tripling up in many cases.
6.     If you’re a family staying in a motel on your own thin dime because you have nowhere to go, HUD won’t count you. Most of the families that Ms. Craft works with have someone working, but the motels eat up most of their meager pay, giving them no option to save for a security deposit to move out.
7.     HUD pits single adults against families and youth by forcing communities to prioritize adults in order to get funding. While HUD pays lip service to serving families (not so much youth), their funding decisions tell the story.

The dire realities most people don’t know until they experience homelessness: Many communities don’t have shelters. Some shelters turn away boys in families, don’t accept intact families, same-sex parents, those with criminal records, substance users, or parents with work schedules conflicting with shelter curfews.

First Focus, a children’s advocacy group, estimates  over 1 million homeless children and youth are ineligible for HUD assistance because of not being homeless enough to satisfy HUD guidelines.

And HUD continues to push “Housing First,” a way to pop people into housing and then offer services to help them., although HUD has shifted away from funding services. Housing First was used mostly for those deemed “chronically homeless” by HUD’s parlance with mixed results. Even this approach is doomed, with funding a major issue, hello Congress! And HUD’s one-size-fits-all approach to homelessness doesn’t work, as this short video by the Institute of Children, Poverty and Homelessness points out.

Especially in light of the latest blizzards and Arctic cold spells, people of compassion would like to think that the federal agency charged with housing the housing-challenged, especially families and youth, was under control. Not so. But hope is on the horizon!

Bipartisan legislation aimed at expanding HUD’s definition of homelessness has been introduced, with growing support making it likely that soon HUD will have to face the brutal reality that they need to help millions of kids and adults with nowhere to go.

To help homeless kids, urge your lawmakers to pass the new(old) legislation simply by going to www.helphomelesskidsnow.org  and sign the petition. Takes just seconds!

If nothing else, HUD is guilty of a big logic FAIL. How do you justify claiming reduced  homelessness in light of a shattered economy, massive foreclosures and evictions, slashed affordable housing stock, pathetic wages for the bulk of the working class, inadequate health care and child care, and more? Oh yeah, just don’t count them.
Posted by Diane Nilan at 9:01 AM

Not much has changed Diane since you wrote this great piece about HUD and their failure to provide clear effective guidance towards ending homelessness and the many a housing crisis across the nation. I have been in a Motel for 6 months with my 3 young children and Mother who is a disabled senior. We have been clawing our way since the unexpected passing of my wife in 2012. Exactly as you described we pay up to 1450 per month to all stay in this one room. We are sustainable but always under or over qualified for some leg-up program. It is infuriating to not only have unrealistic criteria when identifying eligible homeless families and youth but to have all those millions of dollars in HUD money go to outdated and ineffective programs when good fundable ideas, organizations, and effective solutions are right nearby. The Non-profits taking grant money from HUD and only offering assistance to a small subset of the homeless population to help them complete an application for the Asheville Housing Authority's Public Affordable Housing Program Application (a program with a two year wait and that is 80% ineffective or on moratorium) should rethink their strategies and morals. Glad to read such an insightful piece that has surely raised awareness and inspired the community to take action. Once I get my Family on stable ground, I would be glad to take a road trip with you to Washington DC to paint a picture for Congress or whoever holds the whipping stick over HUD.

Sadly you are correct, nothing much has changed. Tomorrow my colleagues and I will hit the Hill, hoping to get through to those who don't grasp the realities you and too many others face. I'd love to have you join us as Congress needs to hear from you, an expert in homelessness. Thanks for taking the time to comment. Keep in touch. And don't give up!

A respected colleague recently referred to me as a "fierce blogger." With 3 decades in this field, I'm glad I can still be fierce.

I'm fiercely inspired by the invisible homeless kids and families I've met along the way. Despite the trauma, they possess more courage, knowledge and determination than those with scads of material goods.

Let's not call them "less fortunate" for families and teens without homes can teach us all what's important.

Seems to me it's way past time for a compassion epidemic. And it's up to each of us to be fierce about it.

To learn more about homeless kids and families, visit www.hearus.us

Photos in this blog are mine unless otherwise noted.

Diane Nilan
Backroads USA
Do not stop thinking of life as an adventure. You have no security unless you can live bravely, excitingly, imaginatively, unless you can choose a challenge instead of a competence. -Eleanor Roosevelt